I’m generally not the biggest fan of capital cities. I don’t know how many times I’ve heard “Why didn’t you stay longer in Paris, or go to Rome, or Madrid, or Rabat”, etc etc. Often I just make excuses but the truth is I’m generally more attracted to small regional places. There’s a reason I didn’t continue to live most of my adult life in Sydney where I was born and bred. Still, I did go to Tirana, catching the early morning bus from Bajram Curri, travelling across the border to Kosovo and back again to arrive in the capital sometime after midday.

Becca and I jumped off the bus somewhere near where we thought we were supposed to go and started walking along the boulevard amongst larger hotels and embassy buildings. What we didn’t realize was that the hostel had moved sometime in the past year or so; luckily for us a friendly taxi driver knew and offered to take us down the road a few minutes for free. Tick number two for Albanian hospitality. Ilir met us at the gates and ushered us in to Tirana backpackers, a cozy little place that also functioned as a cafe popular with many of the natives.

What to say about Tirana? It’s a four hundred or so year old city founded by the Ottomans. It’s one of the earliest areas in Albania to be settled and subsequently hosts many old Illyrian names in and around its suburbs. It has a great National Historical Museum fronted by an impressive large mosaic entitled ‘The Albanians’. Being somewhat into history in places I visit this museum was the first place on my list of sites to visit, and well worth it. It includes information and artefacts dating back to the 6th century BC, the time of the Illyrians, and gives a good general overview of the long and churning history of Albania itself. A must for every visitor to the city in my opinion, even though many items were apparently looted in the ‘wild 90’s‘. A minute or two away from the museum in Skanderbeg square is the great statue of Skanderbeg himself, one of the chief figures and obvious heroes in Albania’s emancipation from the Turkish Ottomans. Having fought for them for twenty years, Skanderbeg subsequently turned his energies to founding the League of Lezhë and uniting Albanian principalities against them.

Other city sites that I visited and are worthy of a look include Et’hem Bey Mosque, the Tanners’ Bridge, the old Clock Tower, the Big Park of Tirana, Varrezat e Dëshmorëve (the Martyr’s cemetery – great view down on the city), the new modern Orthodox Cathedral (that some liken to a nuclear power plant) and the equally bizarre Tirana pyramid, once known as the Enver Hoxha Museum (or Mausoleum). Since Albania’s break from Communism it’s played house to an international cultural centre, a cafe as well as the US Agency for international development. Apparently it’s destined to be pulled down, though there still appears to be much heated discussion about its future. The plan for it to be demolished and replaced by a parliamentary complex in time for the 100th anniversary of Albania’s independence obviously didn’t come to pass.

I spent one pleasant and curious afternoon with ol’ mate Jolly Goodfellow, otherwise known as Rumple the Jester, an Australian performance artist I knew of from the old days of the mid 1990’s. As designated photographer I followed Rumple around the streets of Tirana snapping off shots of him posing in front of fruit stalls, with Roma kids, climbing the above mentioned Pyramid and of course trying to earn an Albanian lek or two by juggling, to the delight of many young kids and families (though some did look confused as to what such a strange character was doing in their little part of the world). Actually that afternoon was one of the highlights of my time in Tirana. Another was having a night or two when the hostel played host to random concerts by wayfaring and local musicians (and big jugs of raki all round!).

Tirana is a nice city to visit, not too big or crazy, with friendly locals, a really cool green-zone within walking distance of the centre and half a dozen different bus stations (some are just intersection corners) servicing different regions of the country and abroad. Just ask some locals where to go and you’ll be right mate! As usual though, it wasn’t my favorite part of the country. 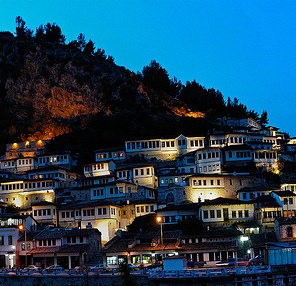 I located the bus station that serviced Berat and wandered a few minutes down the road from the hostel to find the next bus leaving in 15 minutes. Perfect. A couple of hours later, after going in what seemed haphazard directions first west toward the coast, down, inland and back up I was dropped off at the old bridge near the centre of town, crossed the Osum river and walked up the hill to Berat Backpackers in the old district of Gorica.

With respect to the roundabout bus route, I was later told a funny story by a local about the way in which public transport functions in Albania. It’s somewhat of a joke I guess with a certain amount of truth. People jest that every bus in Albania must first drive in the opposite direction from its destination, then loop around and slowly meander back towards where it is supposed to be going. When it is close, it keeps on going, past where the crow would turn left or right for home, making sure to go at least another half hour out of its way before finally turning around again and reaching its goal. The truth behind this joke likely lies in its reflection of the way the roads have been built, crisscrossing the country in a strange network of higgledy piggledy paths, sometimes paved and often potholed. Having said that, the bus drivers mostly seemed good natured and patient in their approach. Visitors do well in adopting a similar strategy.

Anyway, to Berat. Berat is a small old Ottoman city south of Tirana, one of if not the best preserved of Ottoman towns in the Balkans. Alongside Gjirokastër it is one of Albania’s ‘museum towns’. I’d visited a number of areas in the Balkans that the Ottomans had ruled over for close to 500 years but never seen whole districts preserved as well as in Berati. The Gorica district as well as that of Mangalem are rife with old Ottoman buildings and the local Ethnographic Museum is housed in a well preserved traditional dwelling from the 18th century. The building itself is as interesting as the exhibits inside and I couldn’t help but imagine myself sitting cross legged on the small raised corner of the verandah reserved for tea drinking and discussions of the day’s events.

I spent some days walking around different districts in Berat, hiking up to the old citadel and bush-bashing back down, visiting the old Roman ruins above the hostel in Gorica and doing what all worthy Albanians do, walking the Giro. The Giro is a national pastime of sorts where everybody comes out to stroll up and down one of the main boulevards in most towns; taking time to talk, relax, sit and enjoy a coffee in the late afternoon light. The road is blocked off from motorized traffic for a couple of hours becoming a slow motion pedestrian highway.

Another thing I stumbled upon in Berat was the world of the Ottoman Han, old inns traditionally catering for traveling tradesmen and the like selling their wares in the old bazaars of towns (they were prominent throughout the Balkans and as far east as Central Asia). It was a place for them to do business, look after their horses (many included stables), eat sleep and potentially get up to no good whilst away from their wives. The Han in Berat is located within a small compound that also includes the King Mosque and Halveti Tekke (Teqeja e Helvetive), a Dervish lodge belonging to the Khalwati order of Sufi’s. Tekke’s are an interesting phenomenon in themselves, a counterpart to the more orthodox Madrassa, hospices for Sufi travellers and much more. Many Tekke’s in the Balkans belong to the Bektashi order, another Sufi order with its roots in 13th century Persia. Yes the world moves about doesn’t it. But more on this later.

One other highlight of my time in Berat was the weekly gypsy markets where is everything is up for grabs at ridiculously low prices. Having a backpack that already weighs 15 or so kilograms I wasn’t that keen to increase the breadth of my belongings so just wandered through. Had I been keen to buy I could have picked up a few kilograms of cheap tobacco, complete stylish Adidas tracksuits for a few euros, chickens, eggs, shoes, socks, turkeys, stirrups, donkeys, knives, jewellery, belts, soccer balls, wigs, cheese, raki, fruit, vegetables, sweets and most everything else you could care to name. The only thing that didn’t seem to be for sale were smiles and friendly chatter which were given away for free. 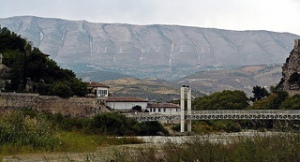 Last but not least I should mention something that I actually didn’t see for a few days and couldn’t believe that I’d missed when I did. Looking to the north of the town I noticed the word NEVER carved into the hills. I assumed this must be some play on the word Enver and asked Scottie from the hostel if he knew anything more. He told me that during Enver Hoxha’s time, the dictator had carved his name, in huge letters, into the hill to reinforce the idea of his omnipresence to the people, or some such thing. Apparently this happened in a number of towns, though I’m unsure about the truth of that. In any case, from what I heard, one day not so many years ago the newly fashioned anagram appeared suddenly out of nowhere, mown into the high ground by a farmer and his son,  perhaps to remind the population of, well, I hardly need to say.

If you have the chance, pay a visit to little Berat for a few days sometime and step back into some fascinating aspects of an older world.

Anyway that’s enough history and serious business for now, time to head further south and cleanse the head with a dip or two in the Ionian sea.

Never go to the Balkans!

U should never go to the Balkans. Never. It´s a terrible part of the world, really. The wild rosemary and homemade pomegranate liqueur is absolutely disgusting, truly. Never mind the 3 month in brewing mint juice. Or what they do to the blueberrys. Terrible people, likewise every Slavophille that ever mentioned the name to me, u know who u are.

Per·e·gri·na·tion ( pɛrɪɡrɪˈneɪʃən )
1. a voyage, especially an extensive one
2. the act or process of travelling